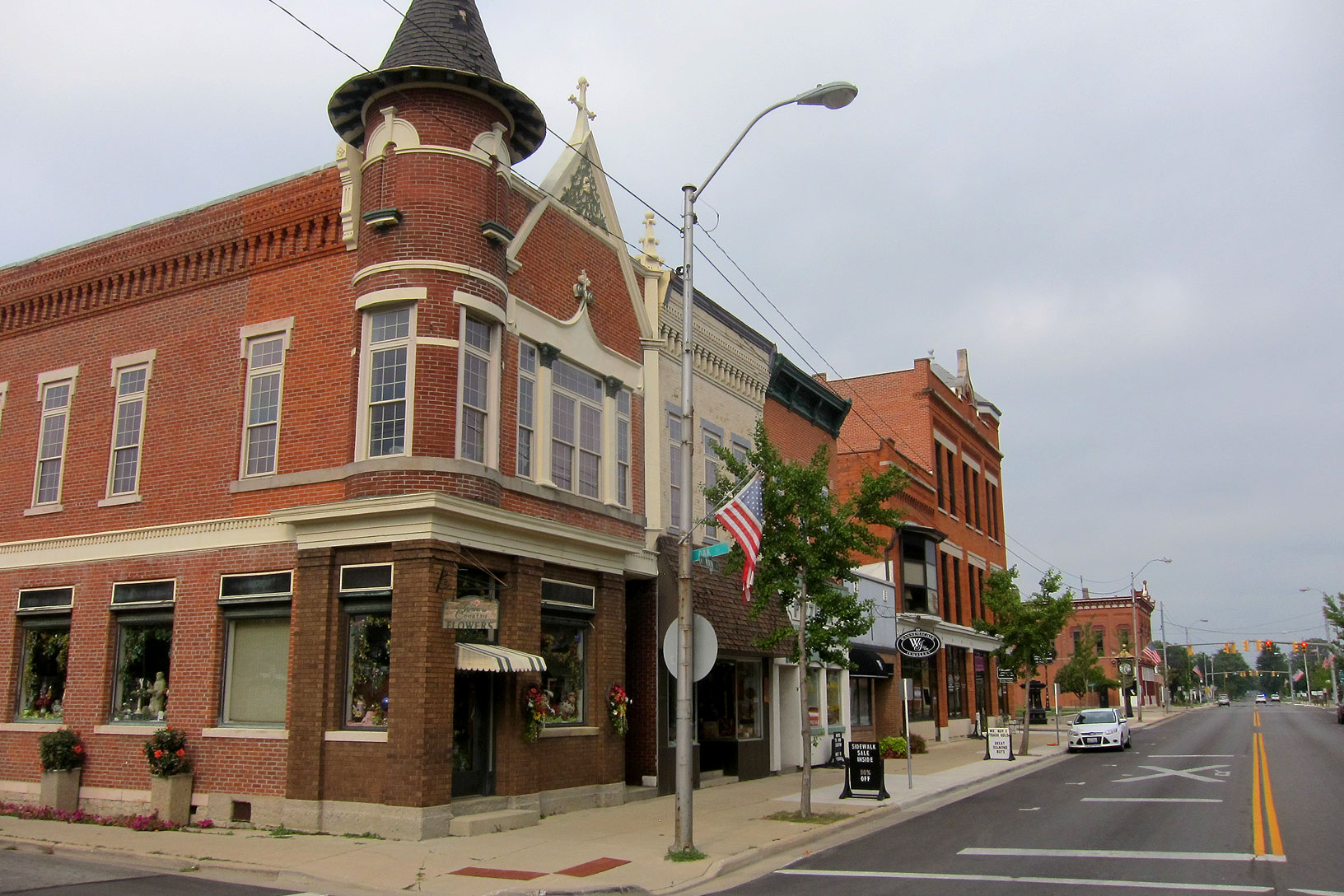 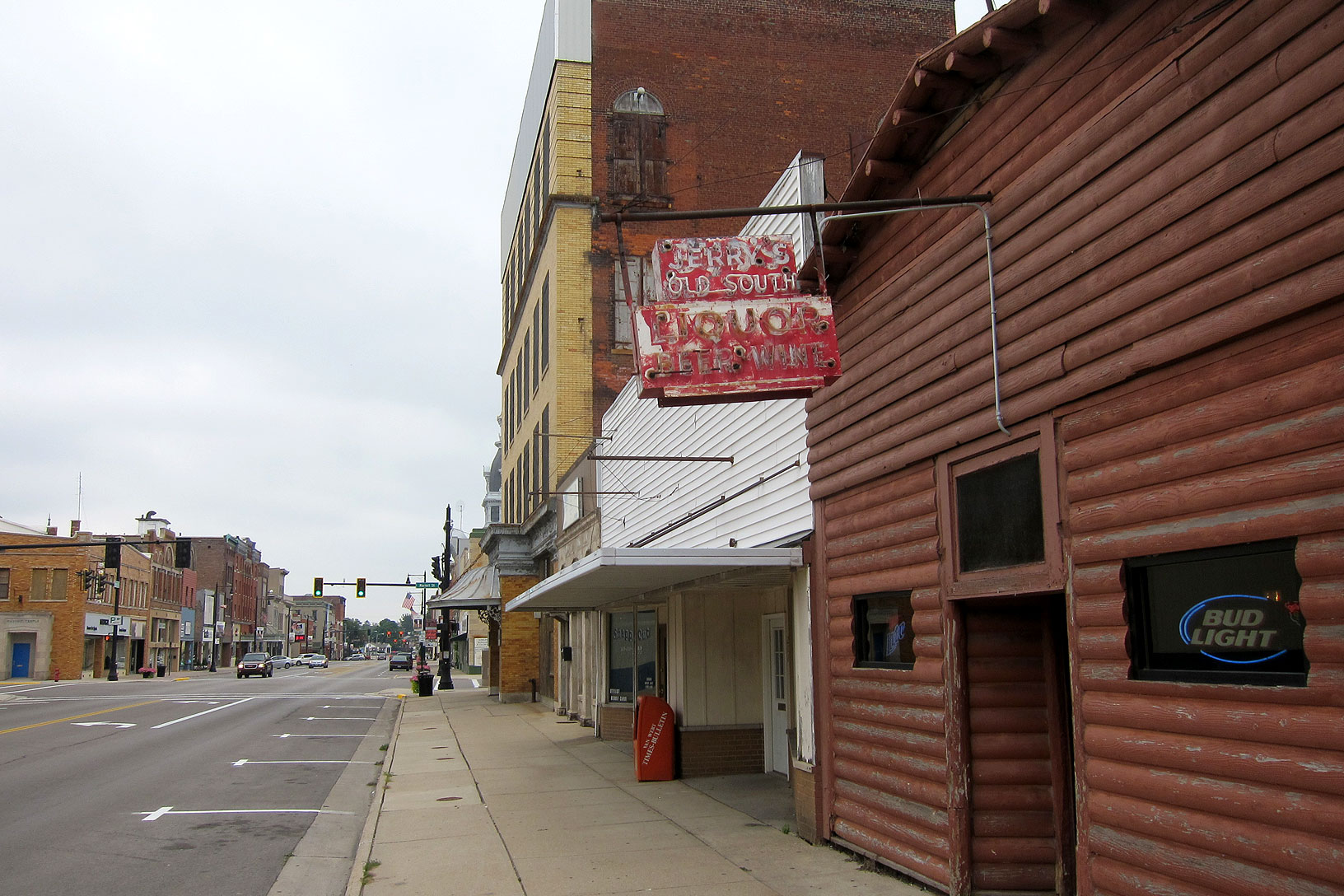 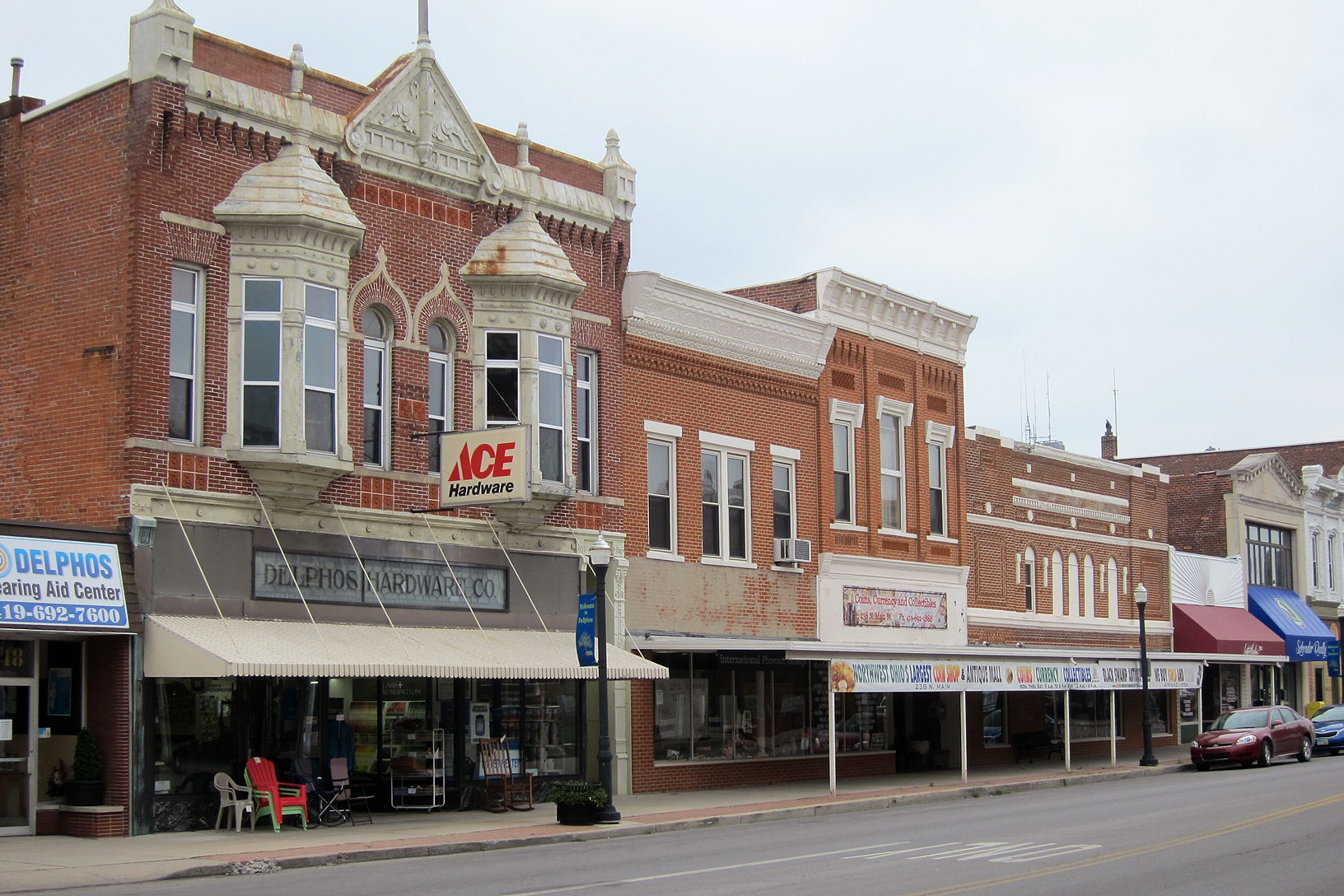 From the air Ottawa, Ohio looks like it would be a vibrant community. All the major local roads lead to this carefully planned and densely built up county seat. It appears to be a very walkable town, with a commercial and civic core surrounded by residential neighborhoods with tree-lined streets.

During a recent visit, I studied the intersection of Ottawa’s Main and Hickory streets from the quiet prospect of a lawn chair on the sidewalk behind the Putnam County Courthouse. The grand neo-classical 1912 limestone courthouse is the focal point of a Main Street lined with well-preserved late 19th century commercial buildings. On this overcast Saturday afternoon in September not a soul could be seen on the perfectly maintained sidewalks around the courthouse square, and only an occasional car or pickup truck passed through town. One mile north of the courthouse the huge Super Walmart parking lot was packed with cars. Fifty or sixty years ago Ottawa would have been quite different. In those days the Saturday afternoon shopping crowd would have been downtown in full force. Though conceived as a hub for commerce and civic life, today downtown Ottawa has ceased to serve its original purpose. No longer a regional shopping center, it is now a peaceful place that lends itself to solitary contemplation. Without the busy traffic and other distractions of days gone by, one can now meditate on the carefully detailed architecture and urban spaces that still define this as a special place.

Across Ohio, small towns bear witness to the transformation of American civilization from a rural-agrarian to an urban-industrial society. Most Ohio towns were established and developed during the decades prior to the emergence of the mass-production factory culture of the late 19th century. The typical county seat/market town either evolved into an industrial center or it languished. This transformation accelerated in the late 19th century. The sense of community that had been nurtured in the small towns eroded as industries began to draw workers to cities like Detroit, Cleveland, and Pittsburgh.

Pre-industrial Ohio resembled the world we associate with writers like Mark Twain and Sherwood Anderson who documented the kinds of conversations and relationships that helped to establish cohesive places. The disruption of this cohesiveness began with industrialization, but small towns were to experience yet another assault in the later twentieth century: the growth of national retail chains that built stores outside the town centers and undercut local pricing. In the impressive architecture of town centers like Ottawa’s we can still see evidence of the era when Main Street was the axis mundi of local community. Stores like Walmart were part of the suburbanization of the landscape that emphasized convenience, privacy, and discounted prices over civic consciousness.

We can document the shock waves that have assaulted these precious places by forces outside the town limits — forces that threatened the intimacy that had existed among townspeople for generations. Infatuated with modern conveniences, lower prices, and higher wages to be found outside the old town center, citizens forsook their old ways for something new and modern. The spiritual corruption of industrialization was the furthest thing from the minds of those seeking change.

The diminished relationship of nature to the town center also played a role in the evolution of the small town. Fields and forests within walking distance of town one hundred years ago gave townspeople a connection with nature that has been compromised. Today the distinction between town and country has been blurred by the development of broad areas along all the arteries coming into town. This blur — also known as suburbia — distances the old town center from the landscape from which it emerged and it further isolates the inhabitants from the benefits of nature.

Though the founders of Ohio’s towns were ambitious entrepreneurs, to speak of ambition here today seems paradoxical. Today the streets of these towns are noticeably devoid of pedestrians and local traffic. Cross country tractor trailers — passing through town at high rates of speed — have replaced the smaller trucks that used to bring merchandise downtown to be sold. Many Main Street business appear to be either operating with reduced hours or abandoned. In many towns venerable institutions like pharmacies, hardware stores and movie theaters — once beacons of light and destinations for a county-wide audience — are in ruins. The movie theatre in Paulding, Ohio stands a few hundred yards from the courthouse square. This was once a popular landmark with cool modern architecture, a place that inspired the imagination of Pauldingites. Now it is boarded up and pieces of the building and other trash blow around on the sidewalk out front.

Old post cards and photographs of Ohio Main Streets froze all activity typically capturing the streetscape during off hours. These images portrayed the street devoid of the smells and noise and messy chaos of people interacting and traffic moving though town. They idealized these places as pristine peaceful oases. Today, in places like Ottawa and Paulding, with little human activity or traffic on Main Street, you can experience the serenity of a 1940s post card. Like walking onto a stage after a play has ended and the audience has left, you can study the backdrops of the grand 19th century facades and empty display windows and imagine the scenes of days gone by. As you stand there it is tempting to propose some kind of creative use for this location — like recreating the parade scene from Hello Dolly or staging a ballet or an opera here. Or perhaps creating an amazing race of some kind. With cars or just thousands of runners. Or a religious revival meeting like the one we encountered recently in Greenville, Ohio where dozens of people were witnessing to each other, sharing testimonies and reading the Bible right on the street. This dynamic was more vibrant than any shopping excursion. One thing is certain for now: the audience has definitely moved itself to Walmart. So we can enjoy Main Street all to ourselves. And we are free to imagine a new story for this beautiful old stage set.